Between 2016 and 2018, FIRST Advisers monitored how long companies took to release their Annual Report following the release of their Financial Results.

The implementation of Same-Day Reporting has become an industry standard in terms of best practice investor relations because it reflects a commitment to release this document at a time when it has most relevance to investors. It also has the practical benefit of freeing up the time of senior management time to focus on post-results Roadshows, AGM Preparation, business operations and planning for the year ahead.

Our research identified more and more companies were implementing ‘Same-Day’ or ‘Simultaneous’ reporting each year, with more than half achieving this objective in 2018.

Two years after identifying this trend, and in a year of significant disruption due to COVID-19, we have revisited our investigation to see how many current ASX300 companies that reported in August (i.e. a June 30 balance date) published their annual report on results day.

Since 2018 there has been a notable change to the composition of reporting companies. Of the 203 ASX300 companies that reported in August 2020, 50 of them were not featured in our 2018 report. Interestingly, 50% of companies that are new to our investigation were Same-Day Reporters, compared with 45% of ‘returning’ companies. 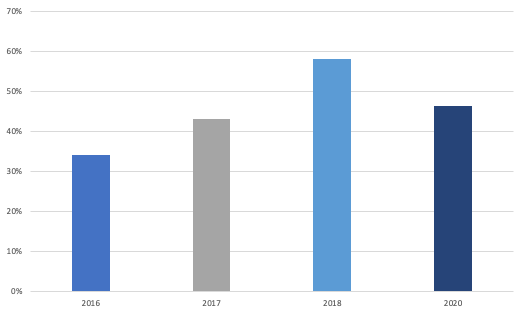 Our analysis of 2020 data shows that there were declines in Same-Day Reporting for companies of all sizes, but most notably mid cap stocks where 43% were identified. Mid Caps were previously reported as the largest adopters of Same Day Reporting with a 33% uplift over 3 years to 62% in 2018.

CHART 2:
SAME-DAY REPORTING WITHIN THE ASX 300 BY COMPANY SIZE 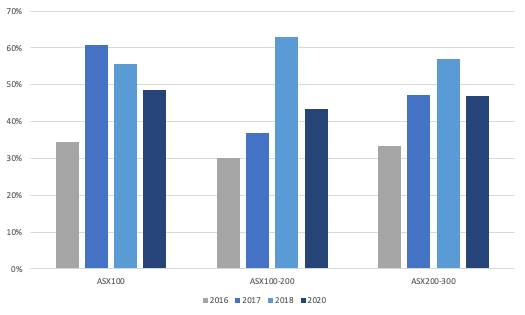 More companies in 2020 are delaying publication compared to 2018

In 2018 we highlighted that companies which had not adopted Same-Day Reporting were still managing to publish their Annual Reports sooner after their Financial Results than prior years. This year, 62% of companies published their Annual Reports within one month of their results, down from 76% in 2018. Findings this year were below 2017 levels (68%) and in line with our 2016 findings (61%). (Chart 3).

CHART 3:
NUMBER OF WEEKS BETWEEN FINANCAL RESULTS AND ANNUAL REPORT 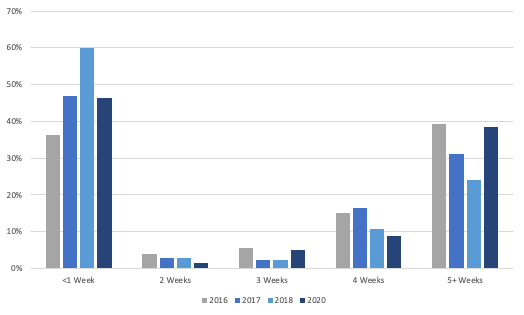 By sector, our analysis also shows that in 2020 Same-Day Reporting was adopted most broadly across Utilities (100% of constituents), Financials (63%), Consumer Staples (60%) and Industrials (53%). For the remaining sectors, less than 50% of constituents were Same Day Reporters. (Chart 4) 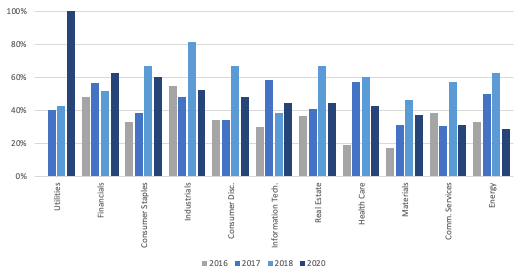 The sector classification of some companies was retrospectively adjusted to reflect the introduction of the Communications Services sector since our 2018 investigation.

In 2020 our analysis identified two constituents in the utilities sector, both of which were Same-Day Reporters. This compares to five constituents in 2018, with three of those since dropping out of the ASX300.

Financials was another sector where the composition of members increased the relative rate of Same-Day Reporting, lifting from 52% in 2018 to 63% in 2020. Although the number of constituents was steady, there was a rotation of members with 7 new entrants while 6 companies we researched in 2018 did not make this years’ list.

Same-Day Reporting in Information Technology companies was 44% in 2020, up from 38% in 2020. The sector experienced the largest net change of members included in our report (+5).

GILES RAFFERTY, Corporate Communications. It is time to think about Annual Reports and then to think again. While an Annual Report must include content required by the Corporations Act and the ASX listing rules,that doesn’t mean we should limit our thinking to just meeting that objective. It is right and proper for the compulsory materials, […]

The importance of good design

GOOD DESIGN is the difference between telling someone and showing them. It can be the difference between informing your audience or convincing them. A carefully composed image, an effectively executed graphic concept or a thoughtfully constructed layout can convert worthy content into memorable messages. We sat down with Campbell van Venrooy, a graphic designer with […]

Giles Rafferty, Media and Corporate Communications “May you live in interesting times”, is often presented as a Chinese curse and, as we enter the final month of 2018, it has certainly been an interesting year thus far. In Australia, the Banking Royal Commission has been the dominant story in the financial media during the latter […]

In July 2018, FIRST Advisers’ analysis of financial results reporting noted the continued trend by ASX 300 companies to publish their Annual Reports on the same day as their Financial Results. Termed ‘Same-Day’ or ‘Simultaneous’ reporting, we have updated our findings to see how ASX 300 companies with a June 30 balance date faired in […]

Daniel Jones, Shareholder Analytics and IR FIRST Advisers highlighted a trend amongst ASX 300 companies towards publishing annual reports on the day they announce full year results, ‘Same-Day Reporting’, in early 2017.  We have updated this analysis in order to confirm if a new standard is emerging around best practice for publishing annual reports. For […]

Annual reports – bring it all together

Giles Rafferty, Corporate Communications and Media Adviser The world of investor relations is getting faster, busier and noisier. As soon as news hits the ASX announcements platform it is time to update the company website; amplify the news with tweets and social posts; push out the media release; set up interviews; live stream webcasts; monitor […]

The Annual Report and the importance of storytelling

Philippa Ellis, Governance & Investor Relations “Stories are the most powerful communication tool we have bar none” according to Andy Goodman of The Goodman Centre. We all carry stories in our heads (pre-conceptions) that strongly influence the way we view the world. These stories cause our mind to be closed to alternative viewpoints even when […]

How to Engage with Passive Investors this Reporting Season

David Whittaker, Senior Investor Relations Adviser The growth in passive investing is one of the biggest shifts occurring in global capital markets. Passive funds now hold as much as 40% of total US equity market assets, up from around 20% a decade ago*. However, very few companies are adjusting their IR strategy to take account […]

When to Publish the Annual Report – A New Benchmark is Emerging

VICTORIA GEDDES, EXECUTIVE DIRECTOR Ten years ago I can remember marvelling at those companies that managed to get it together and release their full, glossy annual report on the same day as reporting their full year results. You could count them on the fingers of one hand. More commonly, three to four months after the […]