Guidance and outlook statements, freshly minted from the February reporting season, are already being consigned to the waste paper basket. This makes sense when every week brings a new development that has the potential to threaten the very survival of many businesses. So what do you say to your shareholders when the temptation is overwhelmingly to wait for more information and say nothing?

There are three key factors that will drive disclosure, particularly when it is earnings related, in a market that is haemorraging with no certainty from one day to the next.

First, the level of confidence based on the facts you currently have at hand that the company will or will not deliver against current guidance or market expectations.

Secondly, recognise that markets are making judgement calls every day about a company’s prospects and it is arguably better that investors are able to do so with credible information than rely on rumour and speculation by those who are far less informed. There is always something that a company can say about current operating conditions including the measures being taken to protect the business and employees and what parts of the business are either being impacted or are proving to be resilient.

And finally, if in doubt, directors and senior management should step into the shoes of their shareholders and ask themselves what information would they be looking for to help them understand the risks and opportunities the company they are invested in is facing.

Since the beginning of March, seventy companies have issued a release to the market concerning the impact of COVID-19 on their operations and its impact on existing guidance. The number of companies disclosing accelerated from a handful in the first two weeks to a deluge with  41 companies reporting in the final week of the month (to 27 March).  84% of companies withdrew their guidance for FY20 often citing poor visibility ahead despite there being little impact on operations to date. Close to half of those came from the Real Estate,  Industrials and Consumer Discretionary sectors. A small number also chose to announce that payment of the dividend payable in March/April would be deferred to October 2020 in order to preserve cash in the short term.

There will undoubtedly be many companies considering whether a capital raising may be required in the next six months (if the accompanying chart is any guide)  to repair the damage being done by COVID-19 restrictions on their ability to operate. 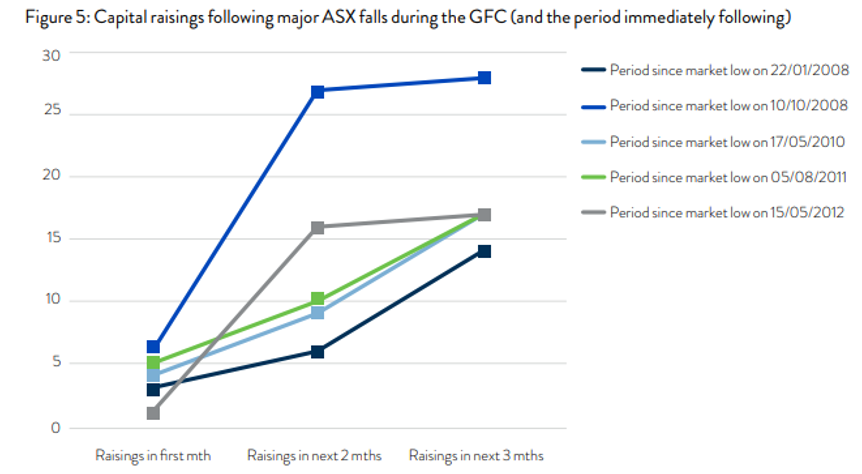 Gilbert and Tobin: Raising Capital in the Age of Coronavirus

In that context all listed companies whether they are raising capital or not should be carefully considering any existing earnings guidance in the market and whether or not that can reasonably be updated or whether it should be withdrawn. Capital raisings of course require a whole new level of disclosure.

Guidance in the GFC

In 2008 FIRST Advisers began analysing how companies were managing guidance. In August that year companies were reporting right in the middle of the global financial crisis. The ASX had fallen 25-30% over the previous eight months and was on the verge of losing another 25% in the following eight months.  While the underlying cause of that crisis was different, from a timing perspective, the level of fear and uncertainty was much the same as where we are now and where companies are still likely to be when reporting in August 2020.

We reviewed over 200 Australian companies’ results announcements that reported in August 2008, paying particular attention to the outlook statement and focusing less on what was said and more on how companies said it.  We grouped the statements by type of guidance – “earnings guidance” (earnings per share or EPS), “financial guidance” (not including EPS) and “non financial” guidance.  We were also interested to see how Australian corporates stacked up compared to  US companies.

Of the 200 companies we surveyed, just under 20% either omitted comment on the outlook completely, declined to provide any or deferred comment until the AGM. So despite the difficulties faced at the time 80% chose to provide some form of outlook statement.

In both Australia and the US, around 50-55% of companies provide “non financial” or qualitative guidance. The trick with this is to provide the market with the sort of information you would want if you were a potential investor. It is relatively low risk as the discussion is not about the business itself but about those market, economic or industry-specific conditions that have the potential to impact company performance the most.

Interestingly 53% of the group we surveyed then offered some form of financial guidance. This was either a specific forecast or range of a particular metric, or an estimate of growth for the year ahead.  Net profit after tax (NPAT), distribution or dividend per share (DPS) and EBITDA were the most favoured metrics for this group with EBIT / EBITA a distant second, followed even further back  by revenue. This fell well short of the US experience where 86% of US companies surveyed by the National Investor Relations Institute (NIRI) provided guidance at that time on quantifiable financial performance measures.

Let’s fast forward 10 years to look at how companies in Australia have evolved their disclosure practices in relation to guidance. Over the past 3 years our annual analysis of the top 300 in the ASX has revealed a majority (62-66%) of companies provide guidance with up to 80% of those choosing to do so quantitatively. EBITDA was by far the most favoured metric  followed in equal measure by NPAT, Revenue and distribution or dividend per share (DPS).  This compares with a strong bias (60-65%) in the US to earnings per share.

Once the immediate danger is past and companies move into the second half of calendar 2020, the requests for information about operational and financial performance, whether quantitative or qualitative, will start to escalate.  Providing earnings guidance for FY2021 at the full year results briefing will still be challenging for the majority of companies, however there is nothing to stop companies describing the outlook as they see it at the time. It can, and should be updated progressively as the fog starts to lift and some level of normality slowly begins to return over the following twelve months.

The good news is that our market has come a long way since the GFC when it comes to disclosure and the importance of communication. The default position of many boards and management teams then was to say nothing just at the time when investors were desparate for any insight or indicator about what the future might hold. Some of this was possibly legally based “if we don’t say anything, we can’t be held accountable ” or, just plain lazy “there are just so many variables and unknowns that we’d be guessing – let the market draw its own conclusion”.

The reality is that not communicating can send as powerful a message (usually negative) as making a deliberate decision to do so. Be aware that every word that is written in an ASX Release or spoken at investor briefings will be examined carefully not just for what it says, but for what is not said.

The COVID-19 updates that have been released over the past few weeks have generally been full and frank disclosures of how the business is currently faring, what managements and boards are worried about and the steps that are currently being taken to mitigate potential damage. There is frequently an acknowledgement that they don’t know what is coming but are preparing for the worst.

So take control of what information is in the market about your company. In the long run investors remember the companies that keep open the lines of communication and do not gild the lily. They will know their word can be trusted, in good times and bad, which goes to the heart of building credibility and corporate reputation.

GILES RAFFERTY, Corporate Communications and Media Advisor Every Government, company and shareholder must confront climate change according to Larry Fink, CEO and Chairman of BlackRock, the world’s largest asset manager. In his annual letter to CEO’s, Mr Fink says a rapidly growing awareness amongst investment market participants of the risks climate change poses to economic […]

GILES RAFFERTY, Corporate Communications and Media Advisor “It’s important that ASX keeps evolving the listing rules so they remain contemporary, address emerging compliance issues, and continue to serve the interests of issuers, investors, and the Australian economy.” Kevin Lewis, ASX Chief Compliance Officer. A range of changes to the ASX listing rules will come into […]

DAN JONES, MANAGER SHAREHOLDER ANALYTICS During February we monitored companies in the S&P/ASX300 Index that reported for the period ending 31 December 2018, building a picture of the approach to guidance in this market and what that guidance is telling us about outlook for FY19. Around three quarters of companies within the S&P/ASX 300 index […]

We entered the last reporting season in August 2018 with a high degree of optimism. That optimism was very short-lived as markets experienced a sharp sell-off in August, with actual results falling short of previous forecasts. Subsequently, news headlines have kept investors in a pessimistic mood, examples being the ongoing Brexit uncertainty and the ever-present […]

It is important for a company to select an appropriate day when presenting its financial results.  With so many companies competing for attention from buy-side, sell-side and financial media, the correct timing of a result can be very important, especially for smaller companies. Understanding where the peaks and troughs are during a reporting season can help […]

The Importance of Non-Financial Information

Ben Rebbeck, Executive Director If there is one consistent thing the financial markets are saying about Brexit, it’s that there are uncertain times ahead for every major economy – and by extension, for the prospects and financial performance of every major company. When uncertainty reigns, we often hear management or Boards describe disclosure and guidance […]