Despite initial expectations in June 2021 that IPO activity would slow in the second half, there was a record 127 IPOs, raising a total of $8.97 billion. This compares with the previous record in 2015 of 75 IPOs in the second half of that year. The largest IPOs in 2H21 were GQG Partners Inc. (ASX:GQG) and PEXA Group (ASX:PXA) that raised $1.19 billion and $1.17 billion, respectively. 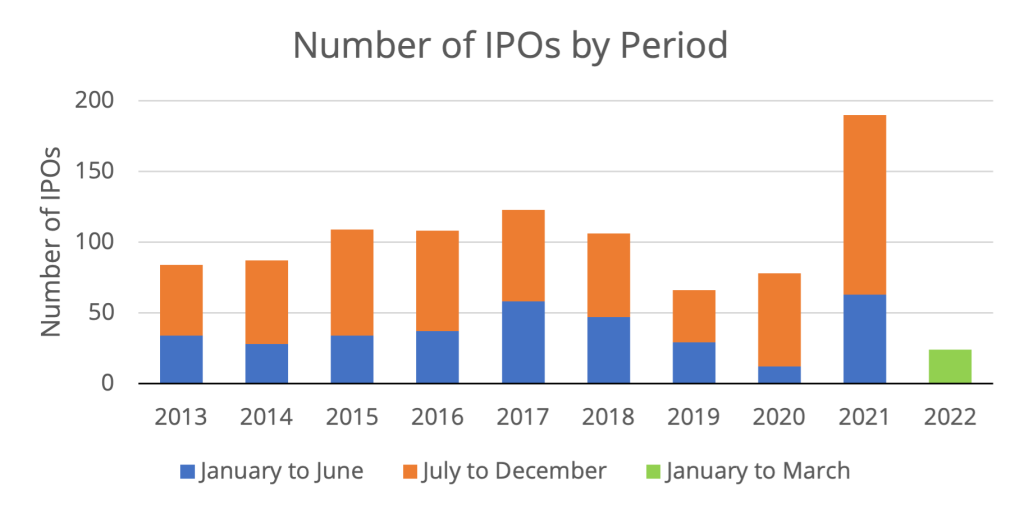 While the number of IPOs in 1Q22 has tracked close to 1Q21, this year they have tended to be much smaller raisings. In 1Q22, a total of $182 million in funds was raised compared to $764 million (-76%) for the same period last year. The largest IPOs in the first three months of this year were Beforepay Group (ASX:B4P) that raised $35 million and US Student Housing REIT (ASX:USQ) that raised $15.51 million. In 1Q21, the largest IPOs were DDH1 (ASX:DDH) and Airtasker (ASX:ART) that raised $150 million and $83.65 million, respectively.

The top performing IPOs in 1Q22 include resources explorers and a pharmaceutical company. NICO Resources (ASX:NC1) was the best performer as at 22 April following its listing in mid-January. It is developing an Australian Nickel mine and rose sharply following an investor presentation during April, resulting in a return of 762.5% to date. Firebrick Pharma (ASX:FRE) is focused on commercialising a nasal spray that kills germs responsible for respiratory infections like the common cold and has returned 130% since listing at the end of January.

The worst performing IPOs in 1Q22 include a mineral exploration technology company, a customer reward provider, and an aged-care technology company. Beforepay Group (ASX:B4P) has been the most disappointing, trading poorly on the first day of listing with the share price falling 44.1% from its IPO price of $3.41 per share. The pay-on-demand provider continued to lose value and was 85.3% lower at 50 cents per share by 22nd of April.

It remains to be seen how the IPO market will perform during the remainder of 2022 however there is clearly reluctance to test the market with a number of prospective IPOs being pulled or postponed during March, citing uncertain market conditions. These include brokerage platform Openmarkets, music company Songtradr, and New Zealand-based car dealer Armstrong’s. Despite this, 14 companies listed in April with another 14 scheduled to list before the end of June. This would bring the number of total IPOs for 1H22 to 52, the third strongest first half performance in ten years after 2021 and the previous peak year in 2017. However, based on upcoming IPOs in May and June, we estimate that funds raised of $658 million during the half will be down 77% on the $2.85 billion raised in 1H21.

Apart from the selection of broker, the second big decision at IPO is choice of registry. Given the dominant position held by Computershare and LINK Market Services in the Australian registry market for the last two decades, the emergence of Automic since 2016 as a challenger to the status quo has accelerated over the past 2 years. In 2021, Automic won 46% of all IPOs, being selected as the registry provider in 88 of the 190 IPOs. In 1Q22 it has picked up registry work for 14 IPOs or 58% of the total. While their gain has been at the expense of all four registries operating in this market, it has clearly had the greatest impact on LINK.

GILES RAFFERTY, Corporate Communication and Media Adviser. 2021 is drawing to a close with a sense of COVID-19 déjà vu. In late 2020 a new COVID variant, labelled Delta, was first identified in India. The Delta variant is characterised by mutations to the ‘spike protein’ which make it highly transmissible. The Delta variant is thought […]

ROWAN CLARKE, Investor Relations The IPO market in 2020 sprang into life in October, having retreated into hibernation with the advent of COVID. The rush to list turned into a stampede as the year drew to a close with December registering a record listing in one month of 29 companies. This included large and high […]

The IPO Market in 2020 – the Final Scorecard

VICTORIA GEDDES, Founding Director In September 2020 the door to the IPO market flew open and dozens of companies poured through in a rush to list before the Christmas/New Year shut down. Memories were still fresh from late 2019 when a promising IPO market was stopped dead in tracks in October as several high profile […]

The IPO window is wide open, but for how long?

VICTORIA GEDDES, Executive Director. The IPO window has unexpectedly opened after more than 18 months of subdued activity. Given the slowdown since February due to COVID-19 and the level of uncertainty surrounding the outlook for economic growth, no-one was banking on a quick return in 2020 to the levels of activity that the market had enjoyed […]

VICTORIA GEDDES, Executive Director. As the market braces for an avalanche of IPOs to hit the market in the December quarter, it is time to review our playbook for IPO investor relations, to highlight just what it takes to maximise the chances of a successful life after listing. Here are our top 10 Investor Relations tips […]

VICTORIA GEDDES, ECECUTIVE DIRECTOR The various high profile successes and failures of new listings since the IPO window re-opened in mid 2013 is salutary reminder that there is no such thing as a safe bet when it comes to investing in the equity market. As we look ahead to 2017, there is already a crowded […]

BEN REBBECK, EXECUTIVE DIRECTOR Oct 5, 2016 On 19 September 2016, ASIC reported on its review of the marketing of initial public offerings to retail investors. The notable feature of this review is that ASIC is now taking a close look at the marketing capital raisings via social media and other platforms, in addition to […]

ASX to lift the hurdles for listing

Ben Rebbeck, Executive Director The ASX has recently launched a consultation process ahead of proposed changes to the requirements for companies to list on the ASX market.  If implemented, the changes will raise the financial and shareholder spread hurdles for all companies seeking to list, whether by IPO or ‘back-door’ listing. According to the ASX, […]