The IPO market in 2020 sprang into life in October, having retreated into hibernation with the advent of COVID. The rush to list turned into a stampede as the year drew to a close with December registering a record listing in one month of 29 companies. This included large and high profile floats such as Dalrymple Bay Infrastructure (ASX:DBI) and Nuix (ASX:NUI) which between them raised a total $3.41 billion. Of the 78 IPOs in 2020 a total $5.33 billion in funds were raised. 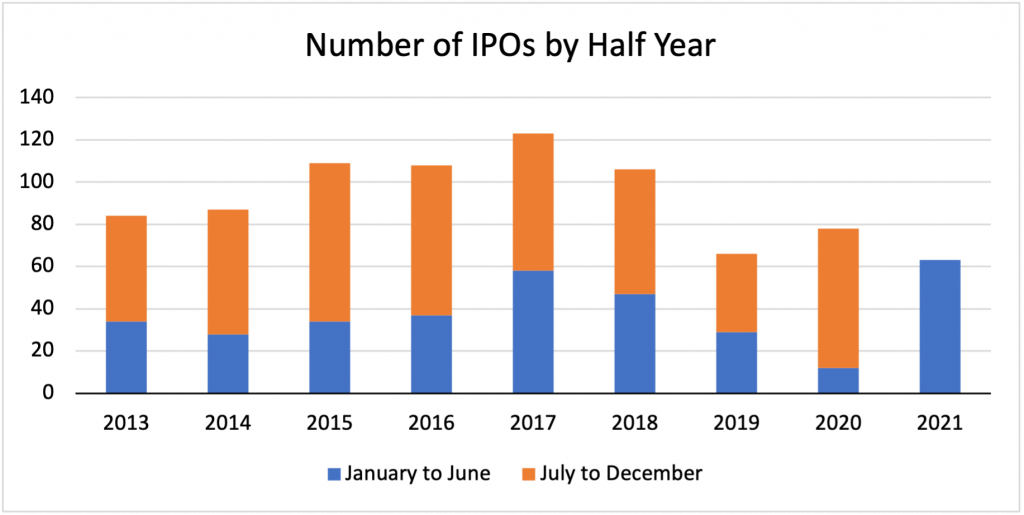 There have been a record number of listings (63) in the first six months of 2021, overtaking the previous record in the peak IPO year of 2017 and far exceeding the first six months in 2020 (12). We see the momentum continuing into the second half with 29 companies scheduled to list in July alone. A feature of listings so far this year has been the number (27 or 43%) of small resources companies with market capitalisations of $50m or less. There have been 6 companies list with a market capitalisation over $500m, although the largest listing this year at $3.038b, property settlement company PEXA Group (ASX:PXA), is slated to list on 1 July.

While microcap resources companies are still lining up to IPO, there has been some notable instances over the past month of larger market cap companies withdrawing from the market. These include private hospital operator Aurora Health Care, hotel owner Australian Venue Co, and software company inflection.com. All were companies with indicative market caps of at least $450m. This is being viewed as an indication that the market is showing signs of IPO fatigue, an observation supported by some disappointing performances on listing by high-profile stocks such as Australian Clinical Labs (ASX:ACL), Pepper Money (ASX:PPM), and Latitude Financial (ASX:LFS).

A review of the listings in 2020 reveals it was the mid-tier brokers who were the most active. Of the 78 companies that listed, Bell Potter (17), Morgans (15) and Canaccord (12) dominated the market, accounting for 47% of all IPO activity.[1]

This pattern has been less pronounced in the first six months of 2021. Of the 63 floats to date the same three brokers have accounted for 38% (24) of total activity – Bell Potter (11), Morgans (10) and Canaccord (8).[2] Several other mid-tier brokers were comparatively active in the IPO market during this time, including Ord Minnett (8) and Taylor Collison (7).

In terms of total funds raised in 2020, the mid-tier brokers also led the way with Bell Potter raising $2.4b, Morgans $2.16b and Ord Minnett $1.87b. The largest IPO by funds raised was coal port operator, Dalrymple Bay Infrastructure (ASX:DBI), for which the joint lead brokers, Bank of America, Citibank and Credit Suisse, raised $1.3bn.

In the first half of 2021, however, two of the top three by total funds raised have been tier-one brokers with Bell Potter responsible for $1.12b, Goldman Sachs for $912m and Credit Suisse $700m. The largest IPO by funds raised was non-bank lender, Pepper Money (ASX:PPM), at $500m.

Another trend that has maintained momentum is the continuing rise of Automic, positioning it as a top 3 Australian share registry. In 2020, Automic won 36% of all IPOs, being selected as the registry provider in 28 IPOs. It maintained the same market share (37%) in the first half of 2021, building up a reputation as preferred provider for small cap companies coming to market. 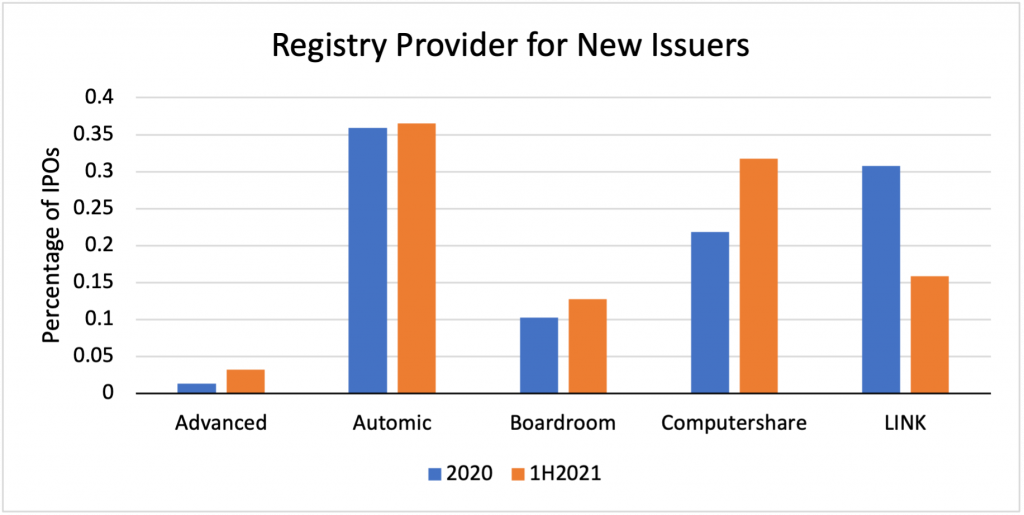 In what has been a busy 6 months for IPOs, it goes without saying that listings in 2021 have had mixed fortunes.

The top performers in 1H2021 include resources explorers, health-related companies, and a telecommunication provider. Pentanet (ASX:5GG) was the best performer, returning 196% to IPO investors, and trading at 74 cents per share in June. The telecommunications provider returned 136% on its first day and added value on news of growing active subscribers and its acquisition of a 15-year licence for the high band 5G spectrum in April. Firebird Metals (ASX:FRB) traded strongly on its first day of listing, adding 197.5% to its share price.

The largest company in our list of top performers is Airtasker (ASX:ART), with a market capitalisation of $255.4m on listing. The online marketplace company beat its March quarter prospectus forecasts and acquired a US-based local services marketplace provider in May.

The worst performing IPOs in 1H2021 include gold explorers, a recruitment company, and a game developer. Tulla Resources (ASX:TUL), traded poorly on the first day of listing, retreating 28.9% from its IPO price. Despite reporting high grade gold drilling results in May, it had lost 50% of its IPO price by June to trade at 45 cents per share.

Our research indicates that there are 29 IPOs scheduled to list in July. 17 of these are small resources explorers, along with two mining services companies and the large copper miner, 29Metals (ASX:29M). Notwithstanding the busy IPO period scheduled for July, market sentiment has cooled, following the recent poor performance of high profile listings like Nuix (ASX:NUI) and Adore Beauty (ASX:ABY) that both missed prospectus forecasts. Evidence of the fragility of the market can be seen in the IPO of Best and Less that was pulled in May due to lack of investor demand, only to be later revived in June when strong interest was received from a single investor. We expect investors to be increasingly cautious when assessing IPOs in the second half of 2021. Prospective issuers will need to apply realistic prospectus forecasts and be reasonably priced to ensure adequate investor demand and a healthy after market.

FIRST Advisers provides a range of both pre and post-IPO services to companies planning to list. We offer more than two decades of experience in investor relations, corporate communication and register analytics as well as a deep understanding of financial markets and its participants. There aren’t too many situations or scenarios we haven’t encountered before, so our clients know they are in safe hands.

[1] Note that 8 IPOs had two or more of these brokers being joint managers.

[2] Note that 3 IPOs had two of these brokers as joint managers.

How fair is your SPP?

ANNA FUGLESTAD, SHAREHOLDER ENGAGEMENT Over the past year as companies have taken advantage of buoyant equities market and COVID related exemptions to undertake capital raisings, retail shareholders have jumped on the opportunity to increasing their holdings through Share Purchase Plans. FIRST Advisers recently analyzed all Share Purchase Plans that occurred between March 2020 and February […]

The IPO Market in 2020 – the Final Scorecard

VICTORIA GEDDES, Founding Director In September 2020 the door to the IPO market flew open and dozens of companies poured through in a rush to list before the Christmas/New Year shut down. Memories were still fresh from late 2019 when a promising IPO market was stopped dead in tracks in October as several high profile […]

RON CAMERON, SENIOR ADVISER, INVESTOR RELATIONS Markets regulator, The Australian Securities and Investment Commission (ASIC), has doubled the amount that retail investors can contribute to Share Purchase Plans. The change is the result of ASIC updating the Class Order that defines how ASX listed companies can issue shares, via a SPP, to registered shareholders without […]

Deal Flow – Retail Investors Have a Point of View

Victoria Geddes, Executive Director Post results reporting season is a time when investment banks start engaging their clients, in advance of the year’s end, to get mergers, spin-offs and takeovers off and running. Witness the recent TPG and Vodafone merger as well as the Coles spin-off from Wesfarmers. The merits of engaging in Proxy Solicitation […]

BEN REBBECK, EXECUTIVE DIRECTOR Oct 5, 2016 On 19 September 2016, ASIC reported on its review of the marketing of initial public offerings to retail investors. The notable feature of this review is that ASIC is now taking a close look at the marketing capital raisings via social media and other platforms, in addition to […]

Timing is Everything When Raising Capital

RON CAMERON, SENIOR ADVISER Thinking of undertaking a capital raising in the near future? If you are a larger company, you have probably had a protracted series of intense discussions on the topics of debt versus equity, placement followed by share purchase plan (SPP), entitlement offer, renounceable versus non-renounceable, pricing, underwriting, sub-underwriting, even project nicknames […]