Locking in the Trust premium

Trust in Australian Institutions has surged during the Coronavirus pandemic to reach all-time highs.  This resurgence of trust means, in Australia,  the institutions of Business, Government, Media and NGO’s are all now viewed as competent where just 12 months ago only Business was seen to be so. Two institutions, Business and NGO’s, are now viewed as both competent and ethical where last year no institution was perceived to be both.  And while Government and Media are trending towards ethical it is the Media that falls short of achieving trusted status, despite its trust score improving 12 points that was only enough to lift the Media from being distrusted a year ago to a neutral status of being neither trusted or distrusted.

This lack of trust in the media is across all the general news and information sources. Traditional media and search engines both saw their trust scores decline while social media and owned media had improved trust scores but off a low base and both are still firmly in the distrusted end of the scale. The findings are drawn from the Edelman Trust Barometer 2021 Country report, Trust in Australia, published on 19 February 2021.

Edelman has been tracking trends in trust globally for 21 years through their Trust Barometer survey. In the past year trust levels in Australia grew 12 points, the highest improvement within the survey, but Australia also recorded the biggest trust gap globally, at 22points, between the informed public and the mass population. While at the extreme end of the relevant scales the findings in Australia are aligned with those globally. 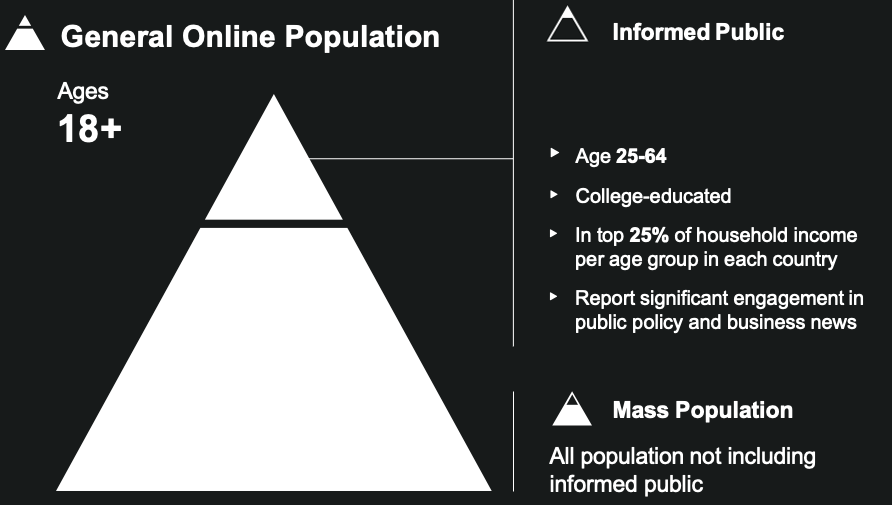 Business seen as most competent

Business has emerged as the institution regarded as the most competent, holding a 30-point lead over government and 12 points over NGOs. The national increase in trust has also been felt across all industry sectors, with the exception of technology. The biggest growth in trust was seen across the Healthcare sector which improved by 9 points, followed by Energy up 8 points, with Telecommunications and Financial Services up 7 points each. The technology sector fell by 5 points, which may reflect concerns technology, in the form of AI, automation  and machine learning is being seen as a threat to job security in the a post COVID19 new normal.

Employers amongst the most trusted 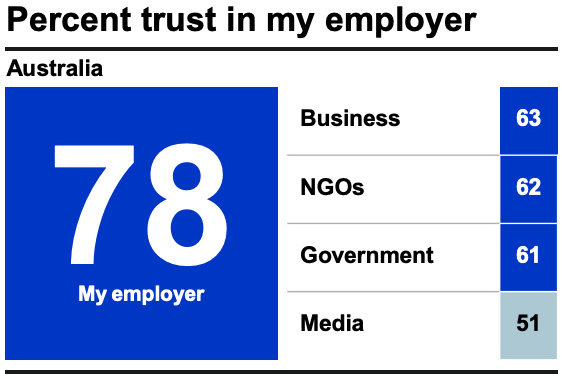 Employers are now seen as one of the most trusted institutions in Australia. 78% of Australians trust their employer over business generally, the Government or the Media. In Australia, the importance of an employer keeping workers safe rose 45 points, maintaining regular employee communications rose 44 points while offering job skills and training programs rose in importance by 39 points over last year. ‘My employer’ was rate the second most believable source of information, after Government.

Use it or lose it

My employer CEO is the second most trusted societal leader after scientists and the expectations of business playing a role in addressing societal problems when Government fails to act remains high. 66% of Australians agree it’s up to CEOs to step in where governments are failing to address a problem; 72% of Australians believe CEOs should be proactive rather than waiting for the government to enact change and 78% feel CEOs should be answerable to the public and not just shareholders.

Over 21 years of the Edelman trust barometer it has demonstrated how trust drives consumer advocacy, employee loyalty and attracts financial investments. Trusted companies are seen to bounce back from a crisis more quickly and outperform their peers in market.

For business and CEOs to take advantage of this trust premium they need to be leaders on societal issues beyond managing sustainability risks, such as addressing systemic racism and upskilling. They need to effectively communicate the actions they take and be seen to be straight talking and provide truthful, unbiased, reliable information. And they must be prepared to work with the broader Business community, Governments, NGOs and others to take collective action to solve societal problems.

It really is a case of use it or lose it as the findings of a supplementary Edelman study covering the second half of 2020 showed that globally the surge in trust as the COVID-19 pandemic took hold was already starting to erode. Between May 2020 and January 2021, at a global level, trust in Government had dropped 9 points, in the Media and NGOs was down 6 points and in business it was down 3 points. Australia was not included in this supplementary study but will not be immune to these trends.

Communicating in a Crisis

Geoff Michels, Senior Corporate Communications Adviser A crisis is an event or a series of events that adversely affects the health or well-being of employees, the environment, a community or the wider public, the integrity of a product or the reputation of an organisation.  A crisis can be operational (fire, an accident) or non-operational (workplace discrimination, […]

Geoff Michels, Senior Adviser – Corporate Communications At FIRST Advisers we are frequently asked to coach senior business executives or managers on presentation techniques.  Generally it’s about coming across well at an AGM, or at a roadshow event or in presenting to audiences large and small.  There is also a significant demand for advice and […]

VICTORIA GEDDES, ECECUTIVE DIRECTOR Those who have been on the receiving end of a short attack describe the process as akin to being at war, or being pursued by a pack of wolves, with the company’s very destruction their opponent’s goal. A short or bear attack, to make the distinction clear, is not the same […]

Why someone on the outside should draft that press release

FIRST Advisers Corporate Communications Some see it as axiomatic that the people within a company are best placed to draft a press release or other piece of external communication. After all, who better to write the news than those on the inside: the people who were responsible for it, were there from the beginning and […]